* the above is from Masnavi

this month can be associated with lots of emotions.I staged my first play on the 20th of August 2008.It was an amazing journey.

I wanted to write a play to and I did. It shaped OK. However, my question was how do I take this forward? I had no one to go to. In fact when the play was written I was not sure that it would be staged and so on.

Then came in a friend,after a drink we were discussing about my writing and the days to go when my stories so light and so forth.She then asked me to mail her the play that wrote. I did promptly as asked. I got a call one day from this friend,she asked me to come over and meet her director.This place is called GOETHE-ZENTRUM HYDERABAD.So there I was in the office,waiting for the director.She is a lovely lady.my friend bless her muah.got this done for me.we spoke and the lady who is the director,heard me out and she pulled out her calender and was like when would you want to do this play.I was like , wait does this mean a yes or a no.She was like of course it means a yes.You must imagine I was thrilled to bits.

So the date was decided and then all I had to do was go back and find that perfect actor and the perfect child for the play.the mails kept going back and forth on the date and the venue.Me and his friend went to an awesome school, I would have loved to have the play there. However, it was way to far.My fear was , who would come all this way to see a play by me?. which was and is true.Then there was a another place called the Vidyasagar Arts Center.This place too seemed like heaven.but the rains were the question.So , that was pushed aside.So my dear Friend was busy looking for a place for the play.

My actors – I wanted another dear friend to play the role of the old woman in my play. Dear K was all excited and ready.However her working hours were so busy that she was dead beat.So I then approached another Friend S,she was reluctant at the beginning.then after cajoling and coaxing she agreed. ( I could not have asked for a better actor). I needed a younger actor and voila her son Sharan was the best and the naughtiest boy for the play. All fell in place. My challenge was to bring out the emotions in my actors as they are first timers and have nothing to do with acting.they did not choose this as profession. One is a housewife and another is a school going chirpy kid.They did not take much time.It was as if i wrote the roles for them. Music which is an essential part of our play was provided by another friend Prashanth.He was right on Track and gave me sounds that blend with the play.Voila the play was going. It had it’s ups and downs. But who cares now,the timing was just right!

I was expecting an audience of 25 to 50, but when someone walked out to check.The place was filled with 250 odd people. My heart could have been running faster.My head was numb and blank. It took 2 hugs from my dear ones for me to get going and the mad look from my son…The show went on to be a good.yes i call it good, I could have done better.The Q&A session went on for more than the play.It was so moving to see people react to something I wrote so personal.I wish my writing never stops and my motivation never dies.

My parents face flashed in front of me after the play.They had tears of joy flowing freely. I guess it was ok for It was the first time I saw them so happy after Vijay’s phase.I was sitting with a dear friend whose face told me a number of things.I was happy to be there, just there at the end with people i care and who love me more than I ask for….

It takes a lot of people to bring a show to the stage. I thank everyone who was involved in this process……without you I would not have not been able to move and The wait would have never got over!!!!!!!!!!!!!!!!

I read a lot of books and thanks to Miss Iyer I too wanted to share with the world few words that I remember.

Two roads diverged in a wood, and I –
I took the one less traveled by,
And that has made all the difference.

The poet said it all in these lines.

I hear “Could I do something different” in the distant horizon…

She was from a Kerala Brahmin family.Petite and beautiful.He was from a far off land called Andhra Pradesh.Came to Palakkad to learn vedas from her father the great Shankara Narayana Sravathi.He was young restless and handsome.She peeped from the corner of the parda to see him.Her swan like eyes caught his attention.

Everyday he used to look that side and wait for her to shower love.
Shy,immature,pure that was what they shared.He went back to his village.Was restles night and day.She was being paraded to men.He went back asked his guru for her hand.Guru refused.He sed “you are a Brahman from andhra,Am a Brahman from kerala,this can never happen”.She cried sitting near the river pamba.her tears still flow there.He was distressed.gave up all his social life.

He wrote her a letter,said “I will wait for you at the river,if you love me run away,run away from them and come into my world.I promise to love you like a new born child”.She ran and came into his arms.She came to his village.New place,new language,new surroundings,new people.Her mother came and asked her to come back.She refused,he is mine now and I am his she said.the same eyes that cried,were filled with tears of joy.

The whole village out casted the kerala girl and the andhra boy.They moved into his ancestral house.She gave him 3 children.He showered her with the love.they lived and the family lived on forever.

I will go back to her village one day and find her origins and mine too.Sit next to the river pamba and feel her presence.Stand under the tree and see them hug.Wait near the window and watch them pass by.Meet her family and thank them,for without them I would not have started this journey….a journey in search of my great-great-great grandmother’s roots.

I will, one day and feel the love all over again….this post is dedicated to them and to many more who made the impossible, possible in small ways and left us behind to follow the footsteps..

Tomorrow is the most celebrated day of carnatic music.It is Saint Tyagaraja’s birthday.

He was a composer of Carnatic Music.He composed hundreds of devotional songs on Rama.Every South Indian will know atleast one of his keertana’s.My fav is ” Endaro Mahaanubhavulu”.
He was born into a Brahmin’s family in the Thanjavur district in the year 1767.His grandfather was also a poet-composer in the court of Thanjavur.
He got married to a beautiful lady called Kamalamba and she too was well versed in music.His guru was Sonti Venkataramanayya.When he was eight years old, Tyagaraja composed Namo Namo Raghavaya Anisham in raga Desikathodi.This is how the music career of a great composer began.He was so immersed in his devotion to lord Rama,that he refused to accept to be at the kings mercy and sing in his court.He dedicated his life to Rama and sang in his praise day and night.

Try and listen to his compositions and feel the great sense of peace that bestow es on you.I thank this Saint for composing such melodies like,Nidhi Chala Sukhama,Bantu Rithi Koluvu and many more.

Pancharatna kritis are a set of five kritis (songs) in Carnatic music, composed by Tyagaraja.
They are
Jagadananda Karaka,Sadhinchene,Dudukugala,Kanakana Ruchira and Endaro Mahanubhavulu.
Wish him a very happy birthday.He still is alive, in the music and every note that we sing and listen to!

the above is “ik onkar”, comes from the first 2 words of the scared “Guru Granth Sahib”.It means one and that everyone is equal.

I am a Hindu a Brahmin to be precise.Now why I am I saying all this to you and myself?there is this endless debate about what religion is and how you got to follow your religion from childhood.

My parents never forced my brother and me to follow out religion.They did not force us to go to the temple or for that matter pray.So,was I deprived of religious thoughts.For that matter I know most of the mantras and believe in the vedas.However I am not sure of my belief in The “Gods”.

But my question remains.did anyone see the God’s above?did anyone interact with Ram,Krishna or Vishnu for that matter?.Did anyone sit next to Ganesha or Shiva? I am not sure they did.
I for my thoughts believe in those who lived with the mankind and behaved like them.

I am strange i still go to temple,love the smell of temples actually :).Love the prasad love the chants and love the choir and love the namaz.However i cannot get to stay on anyside.I am always confused bout my idea of Religon.

I believe in Ik onkar.I believe that GOD is one and S/He lives within you.You trust your own self and you have trusted GOD.

The rest is for you to imagine…… 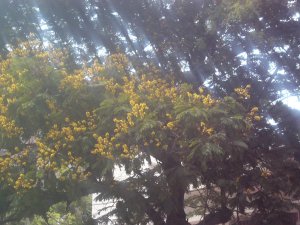 I was driving to work on a pleasant summer evening,my mood was not fit to fix anything.Was listening to “shine on ” and was trying to sing along.There i took a left turn and as usual passing by the lane and the old school road.This was on the right, a gulmohar bathing in the sun ray’s.I had to stop my car and capture it.My mood started shining the song was near perfect.

How I wish everyday was so enchanting and full of moments to capture…..

All that you want to read!